SAGE Automation has proudly been working with the defence industry for more than 15 years, and in that time our technicians have been involved in some major project work. We spoke with Peter Langstreth, one of our Site Supervisors based at Garden Island in Sydney, about his experience working on Navy vessels and how the team approach each task.

Q: What's your job title and how long have you been with SAGE Automation?

A: I started with SAGE Automation as an Electrician in Darwin in January 2015.  Approximately six months later I was promoted to a Level 5 Site Supervisor.

In January 2017 I transferred to SAGE Automation in NSW as a Service Electrician based on Garden Island which is the Royal Australian Navy (RAN) base and dockyard. Since then my role has adapted to Site Supervisor and I’ve been able to grow the team to four.

A: I was lucky enough to complete an adult apprenticeship as an Electrician when I moved to Tennant Creek due to my wife being transferred there for work. After finishing my apprenticeship, and moving back to Darwin, I secured my role with SAGE Automation as an Electrician which involved a lot of work in the field including visits to the islands off the coast of the Northern Territory and visiting Indigenous communities which I really enjoyed. On deciding to move to Sydney to be closer to our family. I was lucky enough keep my employment with SAGE Automation and started work at Garden Island.

Q: What do you do on Garden Island as an employee of SAGE Automation?

We currently work on numerous RAN platforms - the Air Warfare Destroyers (DDG) and the Amphibious Assault Ships (LHD) which are the landing helicopter docks.

There's approximately 55,000 and 60,000 points of IO on the LHD's and DDG's respectively and they both utilise an Integrated Platform Management System (IPMS) which is the Supervisory Control and Data Acquisition (SCADA) control system. We repair and maintain the interface between the sailors and this control equipment, to ensure it is kept fully functional. 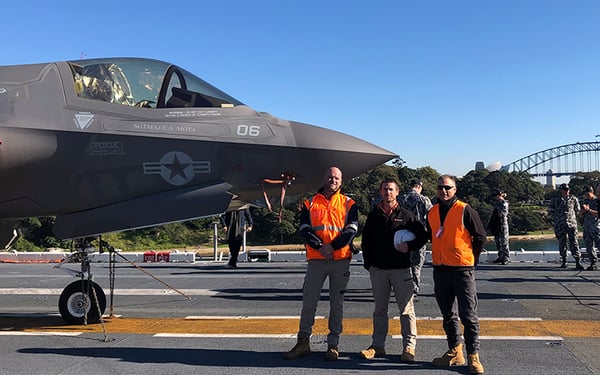 of the USS WASP with a US Marine Corps F35 jet. One of the perks of the job!

Q: What does a typical work day look like for yourself and the team?

A: My role as the Site Supervisor is largely office-based as I’m responsible for quoting, invoicing and resourcing. To work on a high-security site such as Garden Island requires adherence to a number of security processes, so I ensure compliance with these, and that our service technicians have everything they need to complete their work.

A typical day for the Control System Support Technician team (Harry, Matt and Brett) is to review the planned work schedules, board the ship and liaise with the ship staff about what repairs are required. We work really closely with the ship staff to understand what’s happened to the system and then proceed to inspect and repair all of the non-combat systems on the ship that have remote operation. It’s also common for us to provide ongoing training to the ship staff to up-skill them in how to repair a system while at sea due to the high rotation of staff on each ship.

In addition, there is a cycle of obsolescence, where if the team identifies a piece of equipment or system that is no longer viable to use and can't be purchased off the shelf, an investigation is performed to find the alternative product and this is put forward to the Navy Engineering Department for review and approval. This can take some time and often the ship will leave and the work is completed at a later time, unless the replacement is critical, where it is done there and then. Our technicians will at times go to sea with the ships for a few days, so this often involves quite a bit of travel across Australia for the team.

Some of the works we perform are very involved and can take 300-400 hours to complete or even 6 months, whilst other works are much quicker. We have to be agile with our hours as sometimes there are requirements for a ship to get back out to sea quickly - we work whatever hours are required to support the RAN’s schedule.

Q: What is it that SAGE Automation does that's unique in its support to the RAN?

A: The skill of our technicians is undoubtedly what makes our work with the RAN unique. There are no other control and automation specialists to support these classes of ships due to the combination of skill and security clearances that our team hold. The security clearance we require to perform our work and be on the base after hours and for the ability to escort others onto the base and ships alone can take up to a few months to obtain.

Q: What are some of the challenges of working at the Garden Island site?

A: There's the complexity of the obsolete systems and that requires a lot of background work and research on systems that we may not be familiar with and this research takes time. One of the main skills I look for when hiring any staff is their ability to effectively problem-solve as it's crucial to how the team works. The team end up becoming the masters when working on the ships after a few days of reading the manuals, making phone calls and sending emails and there's no one in the country that knows how to work on the equipment.

Q: How are the SAGE Automation team supporting the RAN through the COVID-19 pandemic?

A: We've just employed another two staff who will be with us for the next six months to assist with our work to support the RAN during the COVID-19 pandemic.

The LHD’s have a hospital on-board as they’re generally used for humanitarian purposes and we need to ensure that if the Australian Government makes the decision to deploy the ships due to the pandemic, they’re ready to go. This has resulted in our technical schedules being compressed to ensure deployment as required and we’re the busiest we’ve ever been as a result.

Backup basics: PLC backups will save you money 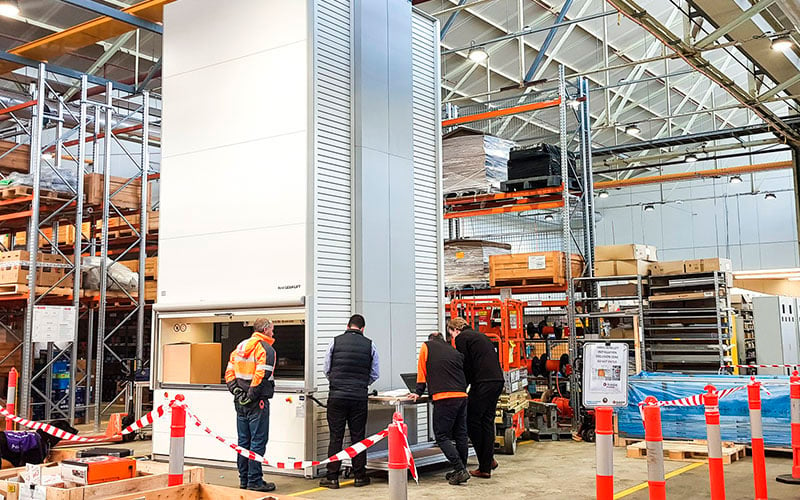 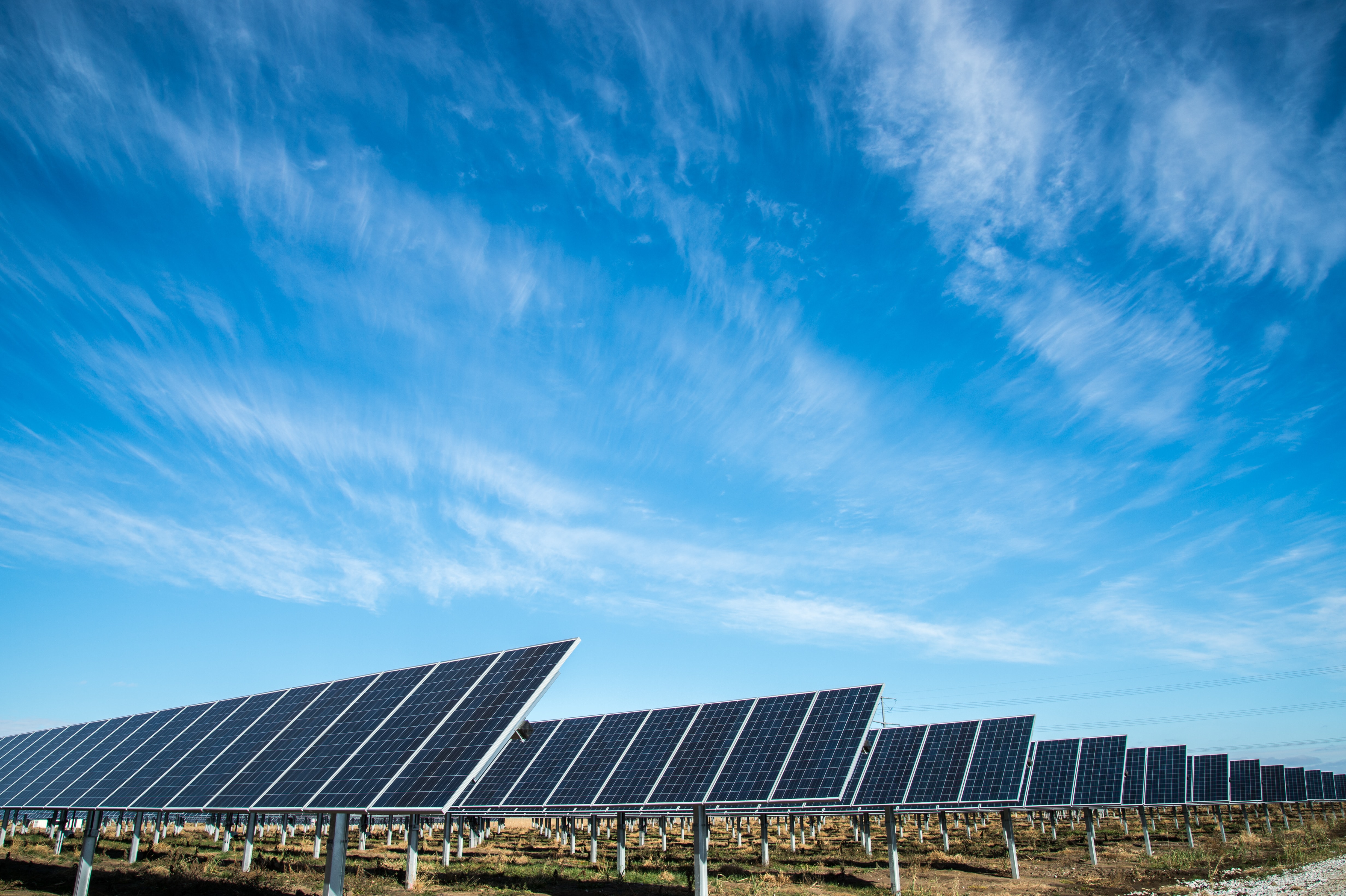 The future of energy in Australia with energy expert Simon English