Delivery of a new control system design featuring redundant PLC on a device ring DLR to eliminate all single points of failure and enhance system design for greater visibility and fault reporting.

Snowy Hydro’s Angaston peaking power station is comprised of 30 diesel-fired Cummins generators functionally separated into five banks of six. They have a combined generation capacity of 50MW that feeds into the national energy grid.

The Angaston plant’s control systems recently underwent an upgrade, providing an opportunity to improve the control system’s functionality and to comply with emissions reductions. To meet Snowy Hydro’s operational requirements, all single points of failure needed to be eliminated from the control systems.

SAGE Automation was engaged by Snowy Hydro to deliver a new system design and to expand the functionality of the control system.

SAGE delivered a system featuring a redundant PLC on a device ring DLR that eliminated all single points of failure and enhanced the system design to allow remote visibility and faster fault reporting.

Direct communication with Snowy Mountains Control Centre (SMCC) was developed to allow remote visibility of the site and quicker fault-finding was addressed. SAGE also created a new, more resilient security scheme that involved hardwiring all protection to remove possible faults in software. This combination of improvements created a template for standardising Snowy Hydro’s control platforms across their other diesel power assets. Diesel emission reduction was also assisted through the improved control of a urea dosing system, helping to meet Snowy Hydro’s stringent standards.

One of the main challenges of the project was the control system was not able to be easily expanded. As part of the control system upgrade, SAGE used Rockwell components to design a solution involving the replacement of a single PLC with a system that has a redundant PLC installed on the Main Control Panel (MCP). This eliminated any single point of failure and allows for automatic start-up and control to AEMO set-points. The new system includes a DNP3 card in each bank PLC controlling six generators, enabling direct communication with SMCC to produce faster fault reporting and greatly improving response time and rectification.

Each of the five generator banks has a dedicated Selective Catalytic Reduction (SCR) system that uses urea to neutralise diesel emissions. Urea dosing starts when any generator is detected running. If the urea system does not operate properly, the SCR system faults, causing generators to stop. SAGE’s redundant PLC solution eliminated this failure scenario and improved visibility of setpoints that control the function of the urea tanks through the design and installation of an ECU closed-loop system.

Through the design and installation of the redundant PLC design, SAGE has been able to eliminate all single points of failure in the control systems.

The upgrade has improved the performance of generators in supply of peak power to the national grid.

The additional improvements made during this upgrade will now become a template for standardisation of Snowy Hydro’s other diesel power assets, including stations at Lonsdale, Port Stanvac and HEZ (Hunter Ecomonic Zone). 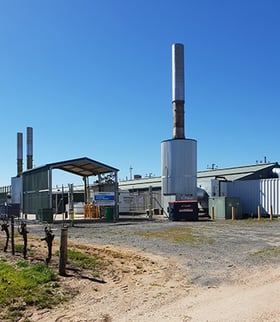