Tonsley Innovation Precinct is set to become the hub for intelligent transport technologies that will change the face of transport as we know it – and SAGE Automation will play a key role.

The company, who specialise in intelligent transport systems (ITS), relocated to the Tonsley Innovation Precinct in September 2017, joining other institutions who are trialling autonomous vehicles there.

Trials are taking place to test autonomous vehicles in real-world environments, with help from the State Government’s $10 million Future Mobility Lab Funds announced last November – SAGE Automation is set to support the projects with its ITS capabilities.

In one project, the world’s first driverless cargo pods will be developed to transport goods on site at Tonsley – proving applications for the delivery and supply chain sectors.

Meanwhile Flinders University and RAA’s driverless shuttle project will transport students (followed by public) across the university’s large campus. Future plans involve an app that will allow people arriving at the nearby public transport hubs to arrange pick up and drop off to the campus.

Emerging technologies are the key to enabling our driverless car future, but they pose a challenge for how to integrate them into our roads.

“The technology has evolved to a point where it can be deployed but road authorities face challenges with interfacing these technologies into existing systems and infrastructure,” SAGE Automation’s ITS Project Manager Damian Hewitt said.

“SAGE plays a key role in integrating the new technology into existing systems.”

“The next frontier is vehicle to vehicle and vehicle to infrastructure connectivity. An example of these would be the virtual variable messages sent via the AddInsight app to motorists.”

SAGE Automation has manufactured and installed Bluetooth capture stations in nearly all Australian states and territories, and is set produce the components required for the nation-wide uptake of the technology.

‘Connective technologies’ like this connect and collect data on road assets to dramatically reduce congestion and safety on roads.

For example, the Department of Transport, Planning and Infrastructure’s O-Bahn City Access Project has incorporated a number of ITS technologies to communicate to the tunnel’s control systems and provide benefits to bus services, for example: 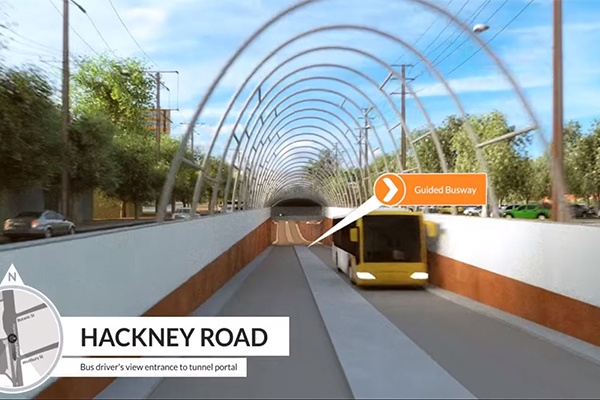 An illustration of the O-Bahn's Guided Busway. Image: Department of Planning, Transport and Infrastructure

Mr Hewitt said such technological advancements are the key to solving our road congestion.

“There is an appetite from road authorities to change their model from delivering expensive road projects and instead turning to innovative technology that can actually solve congestion issues,” he said.

“The opportunity now is in harnessing and integrating this technology into our current systems to reduce the road footprint. This is where we’re seeing the biggest benefits to end users.”

Next step for driverless future

So far applications of autonomous vehicles are largely limited to university campuses and airport trials like those at Tonsley but its closer than we think. It’s been reported that by 2025 ‘mostly self-driving cars’ (where drivers still have the ability to ‘take back control’ if needed) will be a reality and all public transport could be autonomous.

The National Transport Commission in 2017 published the first Guidelines for trials of automated vehicles in Australia. The report said the potential benefits of this technology as are vast with: “improved road safety outcomes, increased mobility for an ageing population and people with a disability, as well as productivity and environmental efficiencies”.

Read more: How SAGE is delivering the latest ITS technologies for road authorities.